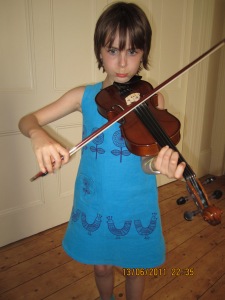 Is your child ABRSM or Trinity? Suzuki, or traditional? And more pertinently, has he or she done Grade Five Theory yet? If you know to what I am referring, then you will almost certainly be participating in the modern day parental arms race.  Namely, getting your offspring to properly master a musical instrument.

It’s about so much more than music, of course. Music, at least in terms of noodling around on the piano, strumming a guitar or trying out new things on the violin, actually hardly features in the struggle. Typically, this is all about  grades, age and a formal classical instrument, a trio which is locked together in a pressurised algorithm calculated to result in a place at a youth orchestra or decent secondary school. When my oldest child was at primary, a parent of a child in her class worked out that the school orchestra at a  much desired secondary nearby was lacking a harpist. She therefore promptly went out and bought a full size harp, plus a Transit van to lug it around in, and set about paying for several years of lessons for her small daughter. Four years later, the child duly got into said school, and I believe gave up the harp a year later.

Mea culpa, (although perhaps not so extravagantly), for I too have spent hours drumming the delights of A Major scale, that piece from A Little Book for Anna Magdalena Bach and all the rest of the elementary canon, into the heads and fingers of my four children. It has been a successful experiment. They now all play classical instruments to a reasonably high degree; they are all in school orchestras and two of them got places at their desired secondaries, on the music ticket. The older ones haven’t yet given up, either, which shows some degree of enjoyment.

That is the first level of engagement. The second level involves parents wheeling out their children to play ‘proper’ instruments (never the guitar) for admiration and glory (their own) with regard to the neighbours. I have never attempted this with my lot, but I have been present when others have. It is the moment at a dinner party when, before everyone sits down,  a red-faced child is produced and forced to play the William Tell Overture on the trumpet in front of a bevy of startled guests sipping Prosecco. If you haven’t lived through this, then a properly rounded middle class life is not yet yours.

Music has of course always been part of the bourgeois world; indeed, the length of the piano was extended in the Victorian era to its modern dimensions, in order to encourage duets at home. Until the screen came to dominate all forms of domestic entertainment, the piano – or indeed, the fiddle – was a key element of it. As the use of these instruments for quotidian fun waned, however, their use for formal musical engagement, particularly with anyone under voting age, seems to have quickened. Adults playing the piano? Very rare. Children playing the piano? Bring it on. Kids sit for hours doing scales or the formal, repetitive exercises devised by someone called Hanon; they don’t improvise or invent. The dread Chopsticks’ and any close relation to it, is usually banned in polite households.

This middle class obsession with their children obtaining Grade Eight on anything properly musical is something I explore in my novel The Square, a satirical poke at bourgeois existence. The plot relies on the presence of a piano teacher who pays weekly visits to neighbouring houses in a London garden square in order to instruct the children of the residents. Does this happen in real life? As I too live in a London garden square and two of my four children play the piano I can attest it certainly does. My invented teacher has a profound love for the piano but is only too familiar with what parents require. Grades, grades, grades. Plus showing off to the neighbours.

For music is so much easier to show off about than, say, sporting ability (another middle class signifier). You don’t have to line up your relations and friends beside a muddy hockey field or cricket pitch, and hope that little Jack manages to score, or at least hit the ball. You simply hand them a glass of bubble while little Jack plays Fur Elise, or at least, the first page of it, on the old joanna. Then everyone knows you are a focused and diligent parent, for as everyone knows, a child won’t ever sit down with an instrument on its own accord (apparently).

The denouement in my novel concerns a fund-raising talent show put on by the residents  in the middle of The Square,  in which the hero of the book, namely an eight year old child, is dragooned by his mother to play a series of exercises on a grand piano in front of everyone else. The idea will be, she hopes, to reveal what a successful parent she is. The reality (of course) is shockingly different. Will the book halt the progress of middle class parents into the world of the Associated Board and institutions like it? Please excuse me while I go and remind my older son to practise his violin. He has an exam coming up. Grade Seven, since you ask.